Postcard Thursday: "For the Accommodation of the People" 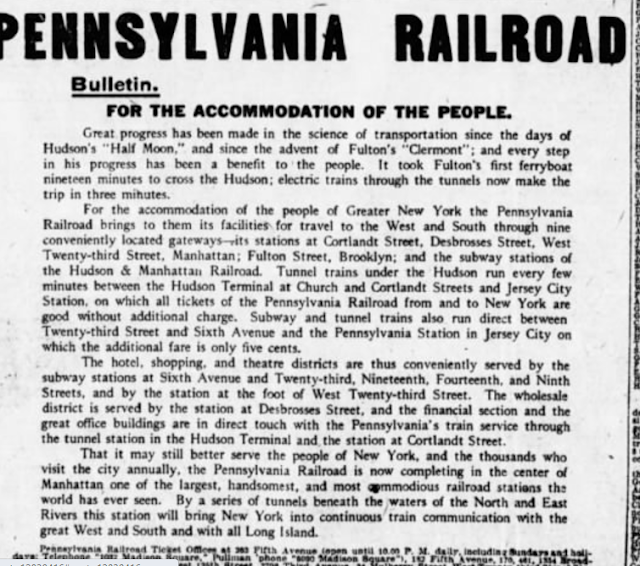 As you sweat through the "summer of hell" (to use Governor Cuomo's term) at Penn Station, here's a look back at what things were like before the Pennsylvania Railroad even had a terminal in Manhattan. We recently ran across this advertisement in the New York Herald from 1909 for all the various ways the Pennsylvania Railroad Company used to be able to get people into and out of Manhattan.

As the "bulletin" points out, the railroad had "nine conveniently located gateways" to the city. Four were ferry terminals, at Cortlandt Street, Desbrosses Street, West 23rd Street, and Fulton Street in Brooklyn. The remaining five were what we today know as PATH train stations, though many of these are now defunct. For example, in 1909 there was a PATH station at 19th Street, which closed in 1954, and there was a direct connection (for an additional five-cent fare) between the 23rd Street PATH and Jersey City.

(Today, if you ride in the front car of the PATH from 23rd Street, you can see the remnants of the 19th Street station as you head toward 14th Street.)

The ad mentions that the "wholesale district" (today's Tribeca) is served by the Desbrosses Street station (by which they mean ferry slip), but doesn't point out that you could also pick up a street car here that would whisk you across the island to the Grand Street ferry slip, and thence to Brooklyn. (This is probably omitted because the Pennsylvania Railroad did not have any financial interest in the street car company.)

Also interesting is the information at the end, almost as an aside, about the "largest, handsomest, and most commodious" railroad station that the Pennsylvania Railroad was building at 34th Street. Penn Station, as it came to be known, opened less than a year after this ad ran, and the ability for trains to run directly from Jersey and Long Island into Manhattan made most of the "nine conveniently located gateways" touted in this ad virtually obsolete.

Posted by Michelle and James Nevius at 1:01 PM