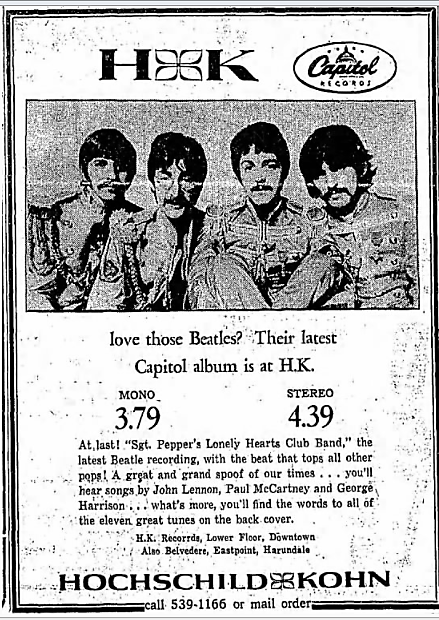 On June 1, 1967, the Beatles released what is widely considered to be their crowning achievement, "Sgt. Pepper's Lonely Hearts Club Band." Except, it turns out, June 1 isn't the day it came out.

In the UK, the album had actually dropped on May 26, rushed into stores perhaps because illegal copies were already circulating. Meanwhile, the album didn't officially come out in the United States until June 2 -- though some stores may have put in on their shelves early here, too.

Though Rolling Stone magazine ranks Sgt. Pepper as its #1 album of all-time, it's instructive to remember that it wasn't fully appreciated at the time of its release. The venerable New York Times called it an "album of special effects, dazzling but ultimately fraudulent." If you have a Times subscription, the whole review is worth reading, but other highlights include:


Like an over-attended child, "Sergeant Pepper" [spelled out, of course, this being the Times] is spoiled. It reeks of horns and harps, harmonica quartets, assorted animal noises and a 41-piece orchestra.

"Lucy in the Sky with Diamonds" is an engaging curio, but nothing more.

In substituting the studio conservatory for an audience, they have ceased being folk artists, and the change is what makes their new album a monologue.

Other contemporary reviews were more positive, but it's also interesting to note that most came out in columns labelled "Teen Scene" or something similar, an indication that no one over the age of 20 really needed to pay attention to popular music. In those columns, while the album is praised, there a sense of resignation that there's nothing with a good beat for dancing.

However, two aspects of the album were seemingly universally praised: the innovation of removing a space between each song so that the whole album played like a suite; and the inclusion of printed lyrics on the album sleeve. Commonplace today, this was a first for pop music.

Posted by Michelle and James Nevius at 12:26 PM