On August 18, 1920, the Nineteenth Amendment to the Constitution was ratified, granting women the right to vote across America.

The postcard above dates from ca. 1913, and was just one of many tools used by suffrage activists to convince the general public that women deserved a say in electoral politics. Though women were granted the right to vote in Wyoming as early as 1869, the campaign to open up the polls to all women was a long, hard battle.


Of course, on the other side, anti-suffrage activists had long waged a campaign to keep women from the voting booth. In this image from 1880 (below), the illustrator shows caricatures of "women dressing and interacting in society as men; drinking; voting for handsome candidates; driving ugly men from the polls; and a domestic scene showing a man taking care of children." 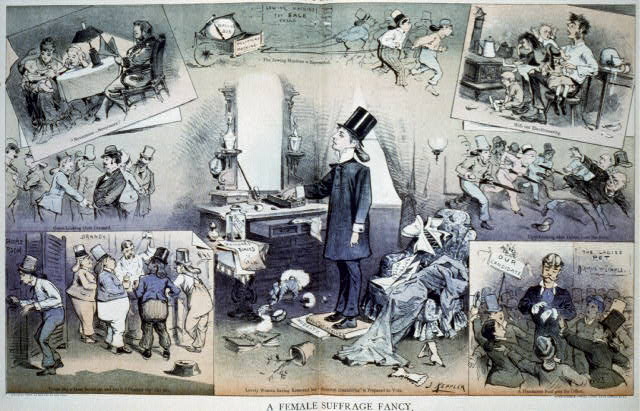 Posted by Michelle and James Nevius at 1:10 PM