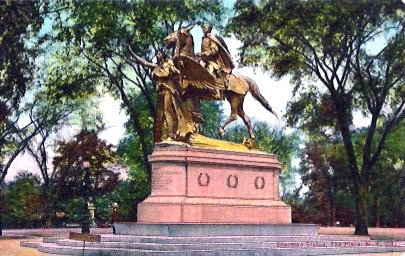 At the entrance to Central Park at Fifth Avenue and 59th Street sits a small landscaped area known as Grand Army Plaza (which, among other things, lent its name to the Plaza Hotel). The square is named for the Grand Army of the Republic (aka the Union army) and features a statue of one of that army's biggest heroes: William Tecumseh Sherman.


William Tecumseh Sherman arrived in New York City in 1886 to reenter civilian life after retiring from the army. (He served as commander of the army until 1883. In 1884, the Republican Party tried to convince him to run for President, to which he famously replied: “If drafted, I will not run; if nominated, I will not accept; if elected, I will not serve.”)

In February 1891, Sherman died in New York and immediately the Chamber of Commerce began fundraising for an equestrian statue to honor the city’s adopted son. The chamber’s members were the mercantile elite and in many ways they were the people who had most benefited from Sherman’s famed March to the Sea. By utterly subduing the south through a campaign of total war, Sherman had guaranteed that northern industrialists, merchants, and bankers would reap the benefits of the post-bellum economy.

The commission went to Augustus Saint-Gaudens [who] created a monumental figure of the general astride his horse; he positioned the horse’s rear hooves so they would trample over Georgia pine. The horse and its rider are led forward by an allegorical figure of Victory. (Saint-Gaudens, often harshly critical of his own work, was pleased with the results. He later wrote: “It’s the greatest ‘Victory’ anybody ever made. Hooraah!”) Because Saint-Gaudens disliked the ugly, industrial patina of most metal sculpture, he gilded the general in two layers of gold leaf; when it was erected, it was the only gilded statue in the entire city.... The statue was unveiled on Decoration Day 1903, with prominent national and local dignitaries in attendance. There is an oft-repeated (and certainly apocryphal) tale that one southern woman in the audience, seeing Sherman on his horse and Victory leading him forward, remarked: “Well, isn’t that just like a Yankee to make the woman walk!”

Sherman remains a highly controversial figure, particularly in the states of the former Confederacy. Speaking of controversy: James wrote an Op-Ed piece for The Guardian about the watering down of the AP US History curriculum, which you can read--and, if so inclined, wade into the fray of the 430+ comments.


Posted by Michelle and James Nevius at 11:56 AM