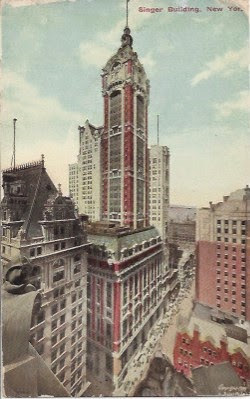 Astute readers will note that today is Friday, but sometimes (as the late, great Douglas Adams once said), it can be hard to get the hang of Thursdays.

And speaking of late, great: the image above depicts the Singer Tower, Ernest Flagg's 1908 skyscraper in the Financial District. This was the second building Flagg completed for the Singer Manufacturing Corporation, America's premiere sewing machine company. The first, a 12-story manufacturing and retail space in SoHo, still stands at 561 Broadway, and is where Flagg tried out his unusual red-and-green color scheme. Before that tower was finished in 1904, he'd already received the commission to build Singer an office tower downtown -- and to make it the tallest in the world. The new skyscraper held that title for just two years (1908-1909) before being dethroned by the Metropolitan Life tower on Madison Square.

The Singer Tower, an increasingly unique structure among the uniformity of postwar design, stood until 1968, when it earned the dubious honor of being the tallest building in the world ever to be intentionally demolished. As James wrote in a piece for Curbed this past week:


Having been acquired by US Steel [in the mid-1960s], plans were underway to demolish the tower to build the company's new headquarters, today known as One Liberty Plaza. Though preservationists rallied to have the Singer Tower designated a landmark, the LPC hesitated. Having been unable to find an appropriate buyer for the Jerome mansion, the LPC was leery of designating the Singer Tower only to have to find a new buyer willing to move in and preserve it. Instead, the commission declined to save it and it fell to the wrecking ball in 1968.

Read the full story about New York's struggle to hold onto its landmarks at
http://curbed.com/archives/2015/04/29/how-some-of-nycs-first-landmarked-buildings-became-rubble.php 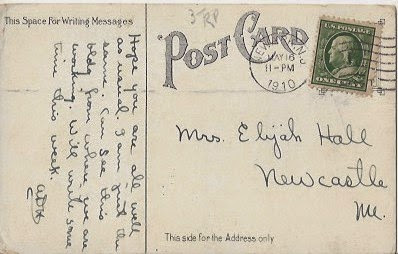 Today's postcard was sent 105 years ago on May 16, 1910. It is one of the first generation of cards where the message could finally be written on the back (Congress changed the law in 1907), but the bulk of the space is still reserved for the address. The message reads:

Hope you are all well as usual. I am just the same. Can see this bldg from where we are working. Will write some time this week. WDH