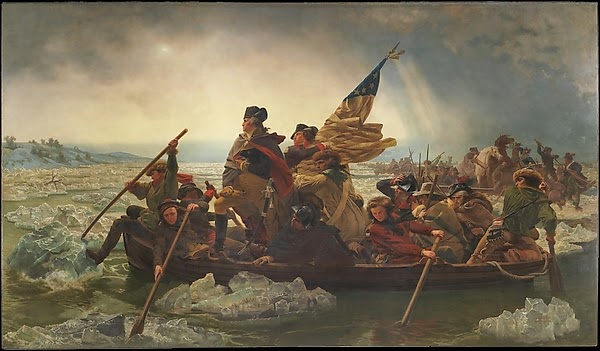 Today marks the anniversary of the December 26, 1776, Battle of Trenton, a major victory for George Washington and the Continental Army over the Hessian garrison stationed in New Jersey.

On Christmas Day, Washington and his troops had crossed the Delaware River, an event commemorated in one of the greatest American history paintings, "Washington Crossing the Delaware," by Emanuel Leutze, which hangs in the American wing at the Metropolitan Museum of Art.

Leutze actually painted the picture twice. He began painting the scene in 1849, but the canvas was damaged in a studio fire. He then set the original aside and started work on this image. (The first version was ultimately completed, but was bombed out of existence during World War II.) Leutze, who immigrated to New York and lived at the Tenth Street Studio in Greenwich Village, hoped to get work from the U.S. government painting patriotic scenes, so he paid to have "Washington Crossing the Delaware" exhibited at Stuyvesant Hall on Broadway between Bleecker and Bond Streets. The painting was an immediate hit--according to some sources, over 50,000 people paid to come see it--and while the United States Congress was interested in acquiring the canvas, it ultimately went to a private buyer who paid $10,000 for it, an almost unheard of sum for a contemporary painting at the time.

Note the flag-bearer behind Washington: that's James Monroe, America's fifth president, who was a member of Washington's campaign.

Yesterday, thousands turned out for the annual reenactment of the crossing.

Posted by Michelle and James Nevius at 12:57 PM