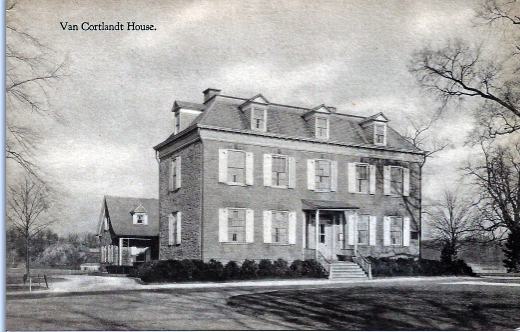 This undated postcard from the early twentieth century (ca. 1915, if we had to guess) shows the Van Cortlandt House in the Bronx, one of the stops we make in the chapter of Footprints in New York that details the history the Delancey family.

As we write in the book:

Soon, I discover that the Dutch woman and I won’t have the place to ourselves. A costumed interpreter—I’ll call his garb late-Colonial/early- Revolution—is leading a group of two-dozen fourth graders down the house’s main staircase.

Tremendous care has gone into furnishing this home, from the seventeenth-century Dutch room on the second floor to the “best” bed- chamber used by George Washington on his visits to the house. That room features a beautiful mahogany dressing table and an English chest of drawers from 1725, both of which descend from family members. They've draped a blue coat and a tri-cornered hat on one chair, as if General Washington has just stepped out for a moment.

If you haven't had a chance to visit the Van Cortlandt House, it's a worthwhile excursion. The resources page of our website has information about visiting the house and other spots mentioned in Footprints.

And, of course, Inside the Apple is available at fine bookstores everywhere.
Posted by Michelle and James Nevius at 11:59 AM