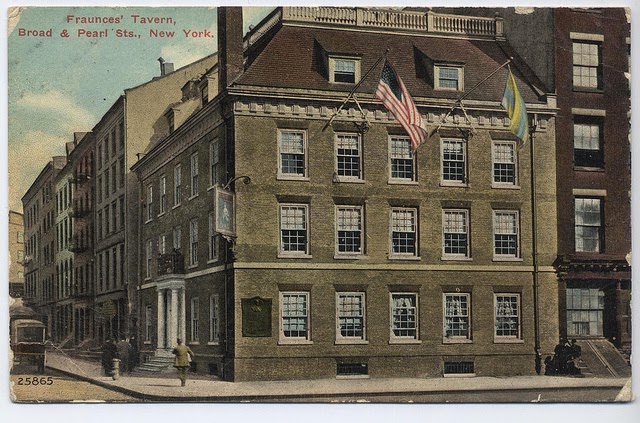 One of the most storied buildings in Lower Manhattan is Fraunces Tavern at the corner of Pearl Street and Broad Street. (And storied is the right word, since much of the building's history seems to be made up.) Known as the place where George Washington bade farewell to his officers, it had originally been the home of Stephen Delancey, a prosperous merchant in the English Colonial period.

In 1700, Stephen married Anne Van Cortlandt, the daughter of the city's former mayor, who had purchased the lot some years earlier and gave it to Stephen and Anne as a wedding present. In 1720, or thereabouts, the Delanceys built the house. While sources differ, it seems likely that the family lived in the home until about 1730; after that time it served as a dance academy and a business until it was sold in 1762 to "Black" Sam Fraunces, a tavern keeper.

However, as we write in Footprints in New York, what stands today on the spot of Stephen Delancey's house

is a historically convoluted re-creation. Having served after the war as everything from a Treasury Department building to a boardinghouse, the building by the turn of the twentieth century bore little resemblance to the house that Stephen and Anne DeLancey built.

In 1904, to save the structure from demolition, it was purchased by the Sons of the Revolution, who hired William Mersereau to restore the building back to what it would have been like when Washington had his farewell dinner. Despite Mersereau’s best intentions, the restoration could at best only be conjectural. He had no pictures to work from and too much of the original building had been altered over time.


This “landmark” was built in 1907 virtually from scratch. It gives school-children a fair idea of what a Georgian building looked like and it gives local businessmen a fair lunch. But it is not old, it is not authentic, and under no circumstances is this kind of thing preservation.

If you want to find out the full story of Fraunces Tavern, Stephen Delancey, and the British colonial era, join us on Sunday, October 12, at 4pm for our walking tour in honor of the 350th anniversary of New Amsterdam becoming New York.

For complete details on how to reserve, visit http://blog.insidetheapple.net/2014/09/columbus-weekend-sunday-walking-tour.html

Posted by Michelle and James Nevius at 9:00 AM