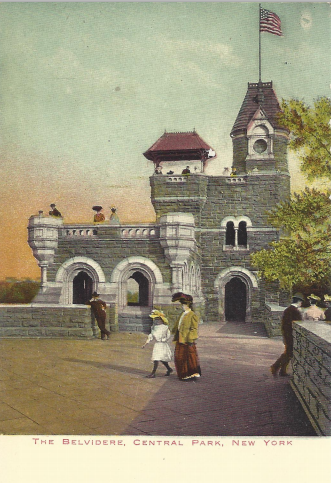 We have a lot of wonderful Central Park shots in our collection, but this may be the best: Belvedere Castle as it looked ca. 1905.

Originally conceived as mere decoration, the castle stands on Vista Rock and was part of Frederick Law Olmsted's picturesque vision for the park. As we write in Footprints in New York, the castle is

an architectural folly built by Vaux and Mould in 1867. It was designed to do nothing more than provide the optical illusion for viewers at Bethesda Terrace that somewhere deep in the park was a giant castle. It was the pinnacle—excuse the pun—of Olmsted’s picturesque vision for the park.

When the Central Park commissioners first saw the map of the Greensward Plan, I’m sure many of them didn’t realize how far-reaching Vaux and Olmsted’s design would be. The designers understood that in contrast to the monotony of the city...the park would embrace the natural topography. This would immediately mean that no two places in the park would be the same. On top of that, the tens of thousands of trees they would plant would provide “the broadest effects of light and shade . . . [producing] the impression of great space and freedom.” What an “exhilarating contrast” this would be, the designers wrote, from “the walled-in floor or pavements to which they are ordinarily confined by their business.”

The greatest amounts of the park were to balance the principles of the picturesque—thick woods, painterly contrasts of light and shadow, and the occasional castle—with the pastoral: sweeping vistas, sloping greensward, open meadows, and an actual pasture.... To contrast with these open green spaces, Vaux and Olmsted and their chief gardener, Ignaz Pilat, planted wooded areas such as the Ramble and the North Woods, forty acres in the northwestern corner of the park that were landscaped to mimic an Adirondack forest, complete with ravines, rustic wooden bridges, and a “loch,” all straight out of an Asher Durand painting.

Lastly, Olmsted and Vaux realized the importance of also including a formal centerpiece to the park. The Mall, one of the first areas of the park to open to the public, is not just a straight path, it runs exactly north- south and is lined with four rows of American elms. Pedestrians, led due north along the promenade, come to Bethesda Terrace, the artistic jewel of the park.

The shock of this overt formality reminds viewers just how informal the rest of the park seems. Similarly, the picturesque touches—a wooden gazebo here, a fake castle there—create views that are almost too much like postcards. And so the mind says: Ah, well if these views are fake, everything else must be real.

Today, Belvedere Castle houses equipment for the national weather service. You can read more about an array of Calvert Vaux's architecture around the city in James's piece on Vaux that was published in Curbed a few weeks ago.

(And if you haven't had the chance, check out his history of St. Mark's Place from last Thursday, which takes readers on a 200-year journey down the East Village's most famous street.)

Posted by Michelle and James Nevius at 11:14 AM