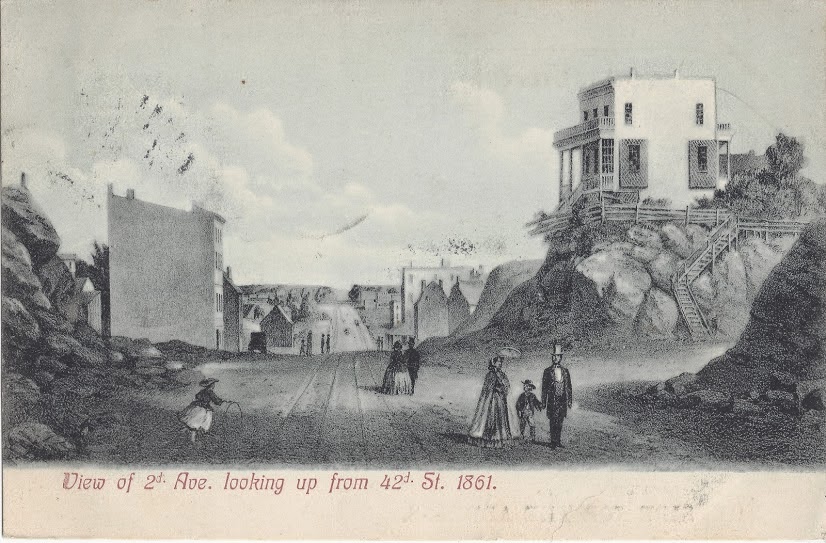 Today's postcard shows the leveling of Manhattan that took place throughout much of the 19th century. When the 1811 street grid was first published, wary landowners like Clement Clarke Moore (author of A Visit from St. Nicholas) were aghast. Moore wrote, "Nothing is to be left unmolested which does not coincide with the street commissioner’s plummet and level. These are men…who would have cut down the seven hills of Rome."

And cut them down they did. As you can see in this 1861 view*, the house at the corner of Second Avenue and 42nd (or 43rd) Street sits precipitously above the newly graded avenue. Eventually, all of Midtown would be more or less flattened out, though there are still a few mild peaks along the avenues.

Also, note the differences between the homes on the two sides of the postcard: The home on the right, built when 42nd Street was still the countryside, was on an open lot and has windows on all sides; the home on the left is a city townhouse. It has no side windows, as its owners know it will eventually have some other house built flush up against it.

By the time the postcard was printed, ca. 1905, the elevated railroad ran up Second Avenue. Here's this intersection in 1915, the view obscured by the El station:

And here's the same view today:

* The original 1861 image is by Egbert Viele, one of New York's greatest surveyors and engineers. It was reproduced at the turn of the 20th century to invoke nostalgia for a bygone era.


* * * *
Read more about the 1811 grid (and Egbert Viele's role in Central Park) in
Footprints in New York: Tracing the Lives of Four Centuries of New Yorkers

Posted by Michelle and James Nevius at 10:49 AM