Charles Keck's "Hiawatha" at the House of Morgan 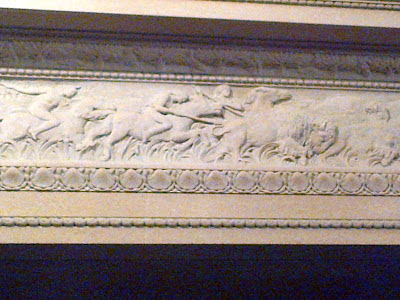 Our blog is probably not the place you normally turn for recommendations on where to buy Halloween paraphernalia, but we urge you to head to Wall Street sometime in the next two weeks to the Halloween pop-up store that has opened at 23 Wall Street.*

Of course, Halloween decor isn't the reason we're sending you..... Twenty-three Wall Street is better known as the "House of Morgan." Sitting at the junction of Broad and Wall streets, it is one of the monuments to American capitalism. Once one of the grandest banks in the Financial District, the interior has been stripped of all its charm -- except in one place, over the doorway. There, Charles Keck's masterful running frieze depicts the story of Hiawatha. It is the only part of this magnificent space that is left, and since the building's interior is normally closed to the public, now is a rare chance to check it out in person.

J. Pierpont Morgan began his career in finance in the 1860s and within a decade had built his first bank at this corner. Morgan's fame and influence skyrocketed in the Gilded Age. In many ways, he was single-handedly responsible for calming the Panic of 1907. As we write in Inside the Apple:

[O]n the news of the Knickerbocker Trust Company’s insolvency after an ill-fated attempt to corner the copper market, Morgan had saved the day. In just 15 minutes, he had extracted promises of $25 million to help prop up the stock market. However, there remained the issue of a number of failing trust companies. So, Morgan gathered New York’s financiers at the library. According to historian Ron Chernow, the commercial bankers were locked in the library, “beneath signs of the zodiac and a tapestry of the seven deadly sins” and the trust company men were put in the study, “beneath the gaze of saints and Madonnas.” Morgan sat in the librarian’s office playing solitaire. At five o’clock in the morning, the incarcerated bankers finally agreed to a $25 million bailout of the weaker trusts and were allowed to go home.

In 1913, the old Morgan bank on Wall Street was torn down so that a new building could be built. As the New York Times reported at the time, observers were surprised to discover that Morgan was not planning a "high office building...with the lower floors reserved for J.P. Morgan and Co.," but instead was contemplating a building "somewhat under ten stories high." The final product was, in fact, only four stories tall, most of the space taken up by the colossal main hall with its skylighted 30-foot ceiling.


The bank was designed by Trowbridge and Livingston (who also built 14 Wall Street, catty-corner from Morgan's bank), and they hired sculptor Charles Keck to provide the interior sculptural detailing. Keck was a New Yorker who had apprenticed with Augustus Saint-Gaudens and was a Fellow of the American Academy in Rome; his best-known work in New York is the Father Duffy statue in Duffy Square in front of the TKTS ticket booth. According to the December 1914 edition of Architecture magazine, Keck created two scenes: on "one side, the industries of the sea, the earth, and the air are depicted through the medium of Greek mythology." On the other side -- and this is what you can easily see just above the main entrance door inside the building -- he "borrowed from the North American Indian mythology the legend of 'Hiawatha' who is supposed to have given the Indians their knowledge of agriculture and the arts." 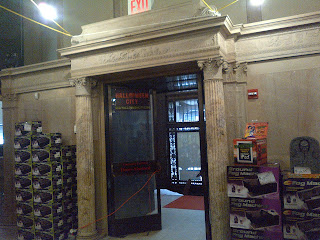 Like most Americans, Keck's familiarity with the Hiawatha story was likely from Henry Wadsworth Longfellow's Song of Hiawatha, which was published in 1855 and quickly became an extremely popular American verse. Here, a white missionary -- "the Black-Robe chief" -- preaches to the natives: 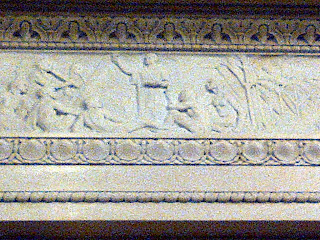 And the Black-Robe chief made answer,
Stammered In his speech a little,
Speaking words yet unfamiliar:
"Peace be with you, Hiawatha,
Peace be with you and your people,
Peace of prayer, and peace of pardon,
Peace of Christ, and joy of Mary!"

* The Halloween City store is open daily through November 2nd.

Posted by Michelle and James Nevius at 11:17 AM