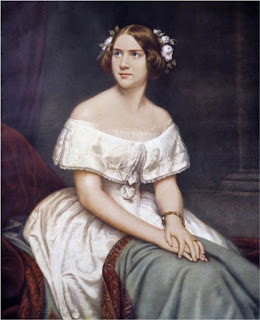 Do you remember the frenzy when the Beatles came to America in 1964? The enthusiasm that greeted them almost matched the public's reaction on September 1, 1850, when Jenny Lind, the "Swedish Nightingale" came to New York.

The difference between the two? People had actually heard the Beatles. With no phonographs or radios, Americans simply had to take it on faith and the word of the concert promoter that Lind was the greatest soprano they would ever hear. The name of that promoter? Phineas T. Barnum.

By 1850, Barnum was well established as one of the great American showmen. As we write in Inside the Apple:

In 1835, [Barnum] took over the promotion of Joice Heth, a black woman who claimed both to be over 160 years old and to have been George Washington’s nurse when he was a baby. She quickly was earning Barnum $1500 a week (this in an era when many Five Pointers might not make that much in three years). By the 1840s, Barnum was running variety shows and in 1841 he purchased a permanent home for his exploits at the corner of Broadway and Ann Streets. Called simply the , it featured everything from minstrel shows to Charles Stratton, who was just 25 inches tall and nicknamed “Tom Thumb.” It was here that Barnum could have—but probably did not—speak the oft-quoted words: “There’s a sucker born every minute but none of them ever die.” (He definitely said the less quotable: “The people like to be humbugged.”)

While on tour in Europe with Tom Thumb, Barnum heard about Lind and her ability to sell out theaters, but Barnum never actually heard her sing. That didn't matter to him: he met with Lind and convinced her to come to America on tour. Lind agreed on the condition that Barnum give her an advance of $20,000 (even being conservative, that's probably half a million dollars today). Barnum had to borrow the funds, and while Lind was preparing to sail to America in August 1850, Barnum was doing everything possible to convince New York's audiences that they were about to welcome into their midst the greatest singer alive--perhaps the greatest singer of all time.

When Lind's ship, the Atlantic, arrived in New York, it seemed like Barnum had succeeded. Throngs of people gathered along the shoreline to watch and as the Atlantic approached its berth at Canal Street, about 40,000 crammed themselves onto the surrounding piers and the roofs of buildings to catch a glimpse of the Swedish Nightingale.

Lind's carriage carried her and Barnum (who'd been piloted out to the Atlantic while it was still in the harbor) to the Irving Hotel at Broadway and Chambers. They passed through two triumphal arches erected for the occasion. Once ensconced at the hotel, Lind was forced to make appearances at the balcony to satisfy the well-wishers who crowded onto Broadway.

The next day, Barnum and Lind began searching for a proper theater in which Lind could perform. (Barnum had begun construction on a "Jenny Lind Theater," but it wasn't ready in time.) After rejecting famous spots like Niblo's Garden, Lind and Barnum finally decided on Castle Garden in Battery Park with September 11 to be the first performance.

Realizing that he could charge as much as the market would bear, Barnum decided to sell tickets to the performance at auction. The first ticket was purchased for $225--to put that in perspective, that amount was about the annual wage of most working class New Yorkers. While most tickets ended up selling for less than $10, Barnum was still able to rake in close to $25,000 in sales.

To further engage the public, a song-writing contest was held. The winning lyrics would be set to music and would be Lind's final song during the concert. The winner was Bayard Taylor (who also received $200), whose winning song featured such deathless prose as:

I greet with a full heart, the Land of the West,
Whose Banner of Stars o'er the world is unrolled;
Who empire o’ershadows Atlantic’s wide breast.
And opes to the sunset its gateway of gold!

Lind's concert was a staggering success as was her subsequent tour of America, where she played in Boston, Charleston, New Orleans, St. Louis, and a host of other cities. At a certain point, Barnum decided to stop promoting Lind and without his showman's talents, she drew smaller and smaller crowds. In 1852, she returned to Europe a very rich woman, having earned perhaps as much as $3 million over the course of her stay in the United States.

To get RSS feeds from this blog, point your reader to this link. Or subscribe via email.

Posted by Michelle and James Nevius at 1:06 PM