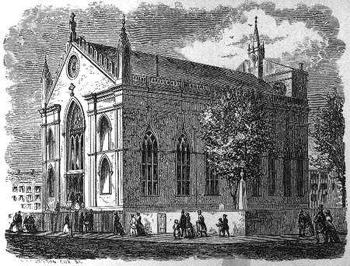 If you are looking for a history-minded way to celebrate St. Patrick's Day, head down to St. Patrick's Old Cathedral on Mott Street in NoLita this Saturday, March 12, to hear the Mass celebrated in Irish.

The cornerstone of Old St. Patrick's--the original cathedral for New York's diocese--was laid in 1809. As we write in Inside the Apple:


The cathedral, made of schist and designed by Joseph-Francois Magnin, who was at the same time working on City Hall, was dedicated on May 14, 1815. The building was one of the largest churches in its day—120 feet long from the entrance to the apse, with a vaulted ceiling rising 85 feet above the floor.... Locating the church this far north of the city was strategic. In 1815, the cathedral’s property on Mott Street was still in the countryside, far beyond the day-to-day reach of most New Yorkers. (It is a little over a mile north of City Hall.) With Catholicism treated with a mix of skepticism and hostility, building the cathedral far from the eyes of the Protestant establishment was simply a measure of safety. Today, people sometimes wonder why St. Patrick was chosen as the patron of this cathedral when New York wouldn’t see a great influx of Irish until the potato famine in 1845. However, when the cathedral opened, the first Bishop of New York, John Connolly, described the 17,000 Catholics in the city as already being “mostly Irish.” The city even had an Irish paper, the Shamrock, which had started publication in 1810.

When the "new" Saint Patrick's in Midtown opened in 1876, the Mott Street building became a parish church. In December of last year, Archbishop Timothy Dolan elevated Old St. Patrick's to the level of Basilica for its "historical, spiritual, cultural and artistic value. This is still a living, breathing, loving, embracing, serving parish."

The Mass on Saturday at Noon will be concelebrated by Fr. Aidan O’Driscoll of County Cork. There will be Irish liturgical music by Cantor Paddy Connolly with accompaniment by Jared Lamenzo on the Cathedral’s historic 1868 Erben organ. There will be readings in Irish by New York University’s Pádraig Ó Cearúill and Clare Curtin, longtime member and former trustee of the New York Irish History Roundtable.
Following the Mass, the Washington Square Harp & Shamrock Orchestra will entertain the crowd with live ceili music. The Mass and reception following are free (donations are welcome).  Old St. Patrick's is on Mott Street between Prince and Houston.

Read more about the Irish in New York in
Inside the Apple: A Streetwise History of New York City.
To get RSS feeds from this blog, point your reader to this link.
Or, to subscribe via email, follow this link.
Also, you can now follow us on Twitter.
Posted by Michelle and James Nevius at 7:55 AM

Thank you for mentioning the Washington Square Harp and Shamrock Orchestra in your post! We have played at Old St. Pat's for the last 3 years and we always enjoy the beautiful setting and the warm reception we receive there.

You are also invited to visit our blog at
http://wshso.wordpress.com/

See you next year at Old St. Pat's!

That is correct! The old St. Patrick's Cathedral is still a fully functioning parish.