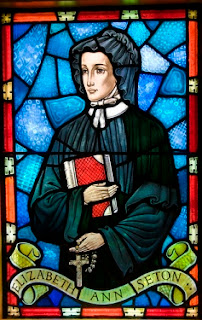 Today marks both the feast day and the anniversary of the death (in 1821) of Saint Elizabeth Ann Seton. Not only is Mother Seton the first American-born Saint,* she is also a born-and-bred New Yorker.
Born Elizabeth Ann Bayley, she married merchant William Seton in 1794; however, her husband soon grew ill, and, in 1803, they sailed to Italy to improve his health. William died in Pisa shortly after their arrival. In Italy, Seton discovered Catholicism--a denomination virtually unknown in New York's wealthy Protestant circles--and upon her return to New York, Seton was received into the Catholic faith, which enraged her friends and relatives.
As we write in Inside the Apple:

"Elizabeth’s family began threatening to have powerful allies in the state legislature kick her out of New York for proselytizing. (Or so the story goes--they never followed through.) Elizabeth didn't give them the satisfaction; instead, she moved to Baltimore in 1808 to open a school and then founded America’s first convent, the Sisters of Charity, the next year. She died at the convent in Emmitsburg, Maryland, in 1821. In 1963, she was beatified by Pope John XXIII, and in 1975, she was elevated to sainthood for her posthumous miracles."

A shrine to St. Seton now occupies the building at 7 State Street. It takes up two lots, the southern portion of which (6 State Street) is the only 18th-century home left in the area. Because the home is a shrine, most people make the obvious assumption that this is where the Setons lived from 1801-03. However, they actually lived next door at number 8. That home, which stood until 1963, the year of Elizabeth Seton’s beatification, was torn down in order that a chapel in her honor could be built in its place.

Mother Seton is the patron saint of widows, people who have lost their parents, those whose children have died, and people having trouble with their in-laws (!).
* This is an important semantic distinction. Seton is not the first American saint--
that honor goes to another New Yorker, Mother Cabrini, who was sainted in 1946.
However, Cabrini was born in Italy.
* * *

Read more about the life of Elizabeth Ann Seton in
Inside the Apple: A Streetwise History of New York City.
To get RSS feeds from this blog, point your reader to this link.
Or, to subscribe via email, follow this link.
Also, you can now follow us on Twitter.
Posted by Michelle and James Nevius at 11:26 AM