Win a Signed Copy of "Inside the Apple" 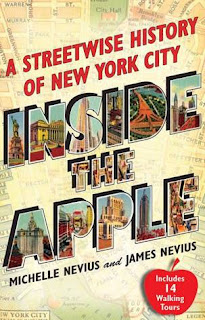 'Tis the season of gift giving and we thought we'd get things started by giving away an autographed copy of Inside the Apple: A Streetwise History of New York City.

The contest is very simple and involves following us on Twitter. Between November 18 and November 29, all you need to do is the following:

1) Become a follower of Inside the Apple on Twitter (if you aren't one already) at http://www.twitter.com/insidetheapple.

The contest will end at 11:59 p.m. on Monday, November 29. We'll announce the winner on our blog and on Twitter on Tuesday, November 30. For more details, read the official rules at http://bit.ly/aRNS41.

Good luck!
Posted by Michelle and James Nevius at 12:42 PM