Remembering Opening Day at the Guggenheim 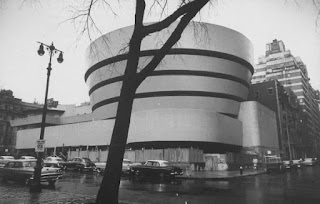 In all the brouhaha surrounding the Solomon R. Guggenheim museum's plan to place a food kiosk outside the museum (a request unanimously denied by the Landmarks Preservation Commission, despite Frank Lloyd Wright's love of hot dogs), there's been little or no mention of the fact that today is the Guggenheim's 51st birthday. The museum opened on October 21, 1959, to mixed reviews. From the conception to completion the project took 16 years, but alas, Wright--who died six months before its completion--never got to enjoy the finished space.

Planning czar Robert Moses--Wright's second cousin by marriage--did not always see eye-to-eye with the famed architect. (In his opening remarks he said, "We need not debate how much of cousin Frank was genius and how much was, let us say, showmanship." In another context, he referred to his cousin as the man "regarded in Russia as our greatest builder.") But Moses made sure the Guggenheim got built. When the Department of Buildings was dragging its feet on giving the museum the proper approvals, Moses called the commissioner and told him: "I will have a building permit on my desk at 8:00 a.m. tomorrow or there will be a new building commissioner."
Many of Wright's colleagues praised the new museum. Philip Johnson called it "Mr. Wright's greatest building. New York's greatest building." Edward Durell Stone, who had worked on the Museum of Modern Art and would go on to build Huntington Hartford's Gallery of Modern Art on Columbus Circle, noted "I personally think it's a wonderful museum.... Why can't people relax and enjoy a fantastic structure instead of continually carping and criticizing."

And carp and criticize they did. The New York Mirror compared it to a "ball of mud" and an "imitation beehive that does not fit in any New York environment." Others drew comparisons to a Jello mold or a washing machine. The biggest complaint was that it would be a terrible space to show art (a critique that still plagues certain shows at the museum.)
If you are on the Upper East Side today, swing by and admire Wright's greatest New York creation and wish it a happy birthday.

Read more about Frank Lloyd Wright and the Guggenheim Museum in
Inside the Apple: A Streetwise History of New York City.
To get RSS feeds from this blog, point your reader to this link.
Or, to subscribe via email, follow this link.
Also, you can now follow us on Twitter.
Posted by Michelle and James Nevius at 1:58 PM