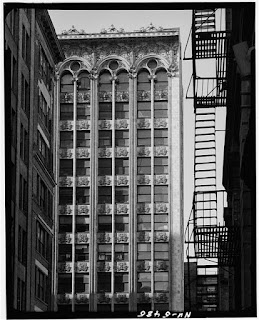 Today, September 3, marks the birthday of renowned architect Louis Sullivan—the “father of modernism”—who would be 154 years old today. Sullivan was born in Boston, the son of an Irish immigrant father (who’d come to America in 1847, the worst year of the Irish Potato Famine) and a Swiss mother.
Sullivan is most closely associated with Chicago, where he moved in 1873, just two years after the Great Chicago Fire decimated the city—thus providing ample work for young architects. Indeed, Sullivan has only one building in New York, but it is superb: the Bayard-Condict Building at 65 Bleecker Street.
Originally just known as the Bayard Building, the skyscraper was commissioned in 1897 by the United Loan and Investment Company and named for one of New York’s oldest families.* However, by the time construction was underway, the bank had sold a controlling interest in the project to Silas Alden Condict who used the space for offices and light manufacturing. There is an oft-told story that Sullivan strenuously objected to the angels below the cornice. Supposedly, Condict insisted on the sextet of angels because he wanted “every tenant and every visitor to the Condict Building to realize the true spirit of fair dealing among men can and should prevail during the six business days of the week, as well as on the Sabbath.” However, as Robert C. Twombly and Narciso G. Menocal point out in Louis Sullivan: The Poetry of Architecture, similar motifs were already a part of Sullivan’s vernacular and the plans for the building were complete before Condict bought into the project, so it is unlikely that Sullivan objected to anything or that Condict had much say in the decorative scheme.
The building, which emphasizes its strong verticality with unbroken columns and is clad in brilliant cream terra cotta, made East Coast architectural critics take notice (perhaps because it was Sullivan’s first major work near their editorial offices). The Architectural Record wrote that it was “the nearest approach yet in New York… to solving the problem of the skyscraper.” The building was substantially renovated in 2000 and is well worth a detour the next time you are in the Village. (Or watching The Wizards of Waverly Place.)
* The Bayards owned a great deal of land in what is now Chinatown and the Village;
not only is there a Bayard Street in Chinatown, nearby Houston Street is
named for William Houstoun, who married Mary Bayard in 1788.
* * *

Read more about early New York skyscrapers
in Inside the Apple: A Streetwise History of New York City.
To get RSS feeds from this blog, point your reader to this link.