Whales in New York - Past and Present

As was heavily reported this week in the local news (see the Times, Post, and US News & World Report), the waters just outside New York harbor are teeming with whales.
Scientists, led by Dr. Christopher Clark, director of bioacoustics research at Cornell's ornithology lab, placed a series of underwater microphones in the waters surrounding New York, thinking that they would find evidence of a few migratory whales. Instead, they found hundreds, including right whales, humpbacks, blue whales, and minke whales.
In its earliest years, New York City was well known for its whale population. In March 1647, Adriaen van der Donck, New Amsterdam's resident lawyer (and the man whose farm gave rise to the city of Yonkers), reported that he'd seen several whales swim all the way up the Hudson River to Troy, New York (almost 160 miles from the harbor). There the poor creatures beached themselves. This made the Hudson "oily for three weeks" and produced a stench that could be smelled for miles. 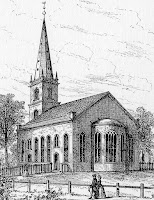 In 1697, Trinity Church, Wall Street, received its official royal charter, which gave it title not only to a significant amount of land in Lower Manhattan, but also to the profit from any whales or shipwrecks along the banks of the Hudson. As the charter noted, the church was permitted to:

"seize upon and secure all Weifts Wrecks Drift Whales and whatsoever else Drives from the high sea and is then  lost below high water mark and not having a lawful Owner within bounds and limits of his Majesties Province of New York."

After securing the whales, the parish could then

"tow [them] ashore and then to cutt up the said Whales and try into Oyle and secure the Whalebone [to sell to raise cash for] the building of the Church aforesaid and to no other use whatsoever until the same be perfectly finished."

Anyone have any idea what a "weift" is?
You can read more about the building of the first Trinity Church and about Adriaen van der Donck in Inside the Apple.
Posted by Michelle and James Nevius at 1:21 PM